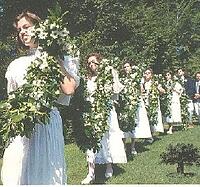 This problem is exacerbated due to SAP HCM's e-recruitment capabilities and the need to create accounts and identities for job applicants.  They can't be expected to wait for such a long time to have access to systems that they need for their job application.

This is where the distinction comes between user accounts and identities.  If you go to a hub and spoke model with a metadirectory in the middle, you can create an identity, what EmpowerID calls a "person object".  This identity has a role and can determine which user accounts the identity needs in the appropriate systems.  Role base provisioning creates the user accounts at the same time, reducing the lag between the identity being created and the user accounts being active.

A few benefits from this approach are that you have an identity repository outside of Active Directory for applicants, external users, contractors, etc.  You don't need to create AD accounts and can still give access to important systems, specific to that identity's role and needs.  You also can update user accounts more quickly, applying provisioning and update rules directly to the affected system from the metadirectory without running through a gauntlet of systems to get to the one you want.

The customer in question had an issue with the length of time it takes to affect all of these changes with their current mix of scripts and legacy IAM solutions.  EmpowerID's metadirectory is often set at a default inventorying interval of 5-10 minutes even for the largest organizations due to the unique way in which it polls changes.  This makes the changes happen well before a user can get frustrated and call the help desk.

EmpowerID has a very feature rich SAP connector that can read and write directly to SAP, giving extensive control over this process.  However, this particular customer only wanted to read from SAP and cost is an issue.  EmpowerID gives you options outside of the connector if you can have a flat file dump from SAP, allowing the metadirectory to inventory that file and still affect the changes on whatever schedule is worked out with the SAP dump.

EmpowerID uses its flexible visual workflow platform to make your identity processes match your business process, creating situations like the one described where the customer can achieve their identity goals and reduce costs in IT.  Take a look at the user provisioning video or schedule a personalized demonstration and get your identities AND users provisioned.