Attribute sync with any identity store

Simple attribute sync is not difficult.  Take a key (user's alias or email address or employee ID) and decide which identity store is authoritative and synchronize the attribute(s).  What is difficult is when you have dozens or scores of identity stores.

If you tried to synchronize all of these attributes without a central identity store like a metadirectory, you would end up with a confusing lattice of synchronization scripts that could easily conflict with each other.  I'm not saying it's impossible, it's just impractical. 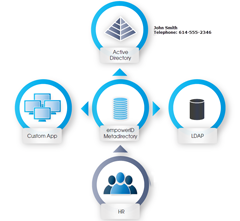 If some rogue admin changes the title in Active Directory using ADUC, empowerID would inventory that change, see that HR is authoritative and roll back the change in AD.  Having the central metadirectory is incredibly powerful for keeping attributes in all identity stores accurate.

But metadirectories are complicated, right?  I saw my first metadirectory in 1999/2000 when Critical Path bought Isocor.  If you asked me that question then, I would have said, "yes, very complicated."  Ask me today and I'll say that even I can manage connectors and attribute flow.

It is as simple as configuring the arrow to indicate the authoritative source.  It can be authoritative from either identity store (arrow facing one way), last change wins (arrows facing both ways), or don't sync (big red dot).  "Big red dot" is a technical term in the world of UI, trust me.

You have these attribute flow rules for every connected system in the identity ecosystem.  From the example of the hub and spoke diagram above, you would have four attribute flow rules to fill out, with empowerID doing the heavy lifting of schema detection from its connectors.  You just decide what maps and what wins.

Having a metadirectory in place also extends attribute sync to the cloud.  Many of our customers have 20%+ of their applications in the cloud now.  You need to be able to synchronize these attributes out to the cloud identity stores.  You rarely have access to the backend database or directory, rendering scripts and simple synchronization tools obsolete and ineffective.

EmpowerID's connector framework can map synchronization actions to its API layer, allowing synchronization from the metadirectory to the cloud applications.  With this capability, you now have all of your identity stores synchronized and accurate.  Contact us for a personalized demonstration of empowerID and we can show you how to synchronize attributes and all of the other capabilities of the most complete and flexible IAM platform on the market.